Private Proposals: Why They’re Better than Public Ones

If you’re a frequent user of social media platforms like Facebook or Reddit, you’ve probably seen a few videos of people proposing in public and getting that big yes. It’s also possible that you’ve seen someone get a heart-shattering rejection from it. And it’s no surprise that they did, too.

According to a recent survey by data analytics firm YouGov, 70% of Americans want to have private proposals. About 75% of them also wish the event to be simple. Here’s why intimate proposals are better than elaborate ones.

A 2016 study by psychologist Lisa Hoplock found that public proposals are more likely to be turned down, compared to private ones. Hoplock, in her interview with Canadian Broadcasting Company (CBC) Radio, said that partners who go for these elaborate public proposals might just be using the crowd and the spectacle into saying yes.

Another guest on CBC Radio, writer Jackie Wong, said that men who make grand gestures like public proposals are “non-consensual ambushes,” where the woman is often deprived of her agency. It’s true. When you have a bunch of eyes staring at you and expecting that you return the favor for your partner’s grandiose effort, it’s hard not to give in. It’s even more difficult to say no after the fact.

Intimacy is Better than Spectacle

Your marriage is a bond between the two of you, and not with the audience at a Yankees game. What better way to pop the question than over your favorite activities or a nice breakfast in bed? Not only are you keeping it intimate, but you’re also acknowledging and respecting your partner’s right to decide for herself. You’ll get a more truthful answer, whether it’s favorable or not. Plus, it’s easier to talk about the outcome when you’re not feeling the shame of being rejected or rejecting someone in front of a crowd.

Should You Bridge the Gap?

People who had semi-private proposals (with family and friends) had a better chance of being accepted than those who went full-on public, according to Hoplock’s paper. This may be an option for people who want to share the moment with people they trust.

However, this is still a slippery slope, as your partner may still feel pressured to give a positive response. As such, Hoplock suggests talking to your partner in advance about marriage before your proposal to get a feel of the engagement and ceremony they want. In fact, the YouGov data also showed that most of the younger population in the survey discussed engagement with their partner way before they proposed.

How to Pull it Off 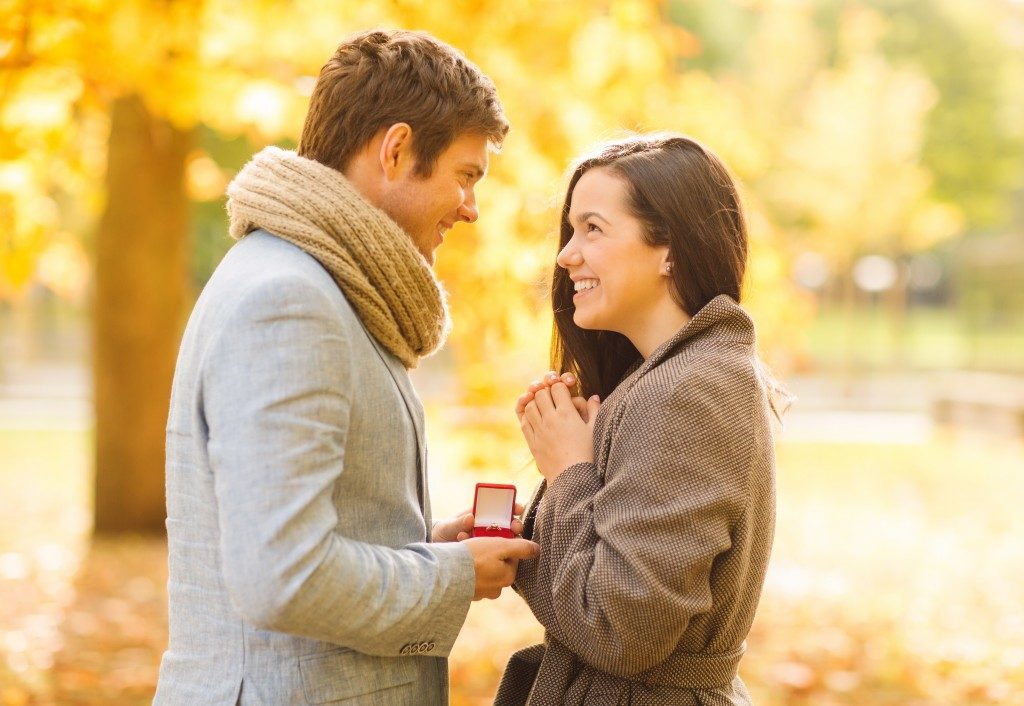 Because private proposals are supposed to evoke feelings of intimacy, your ideas should center around the good memories you had together and creating new ones. Think of the place you went to when you had your first date. Rekindle old memories by reenacting the exact same things you did before finally showing the man-made diamond ring you got her. Maybe you have a video game you enjoy playing together. Try to insert your proposal in the game somewhere. If you have a nice vacation planned with your partner, the escape from the stressful city may be the perfect time to bend the knee.

A private proposal gives you and your partner a safe space to truly be yourselves and decide if both of you are ready for the next step. It’s a way to show your partner you respect their choice and that you’re there for them, no matter what. So get your creative juices flowing and find a significant place to pop the question to them – and only them. The big “yes” is so much sweeter when it’s whispered from the heart.